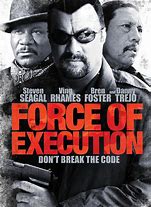 Steven Seagal stars as a gangster who sends his right-hand man (Bren Foster) to perform a hit in a prison.  When he kills the wrong man, Foster must atone for his mistake.  A rival boss has his men tie Foster down and cripple his hands, causing him to go into early retirement.  Foster then spends his time as a bum living above Danny Trejo’s diner.  Meanwhile, a criminal fresh out of jail (Ving Rhames) makes a play for Seagal’s territory.  Seagal then must bring Foster out of retirement to take Rhames down.


Force of Execution is a tad better than expected for a latter-day Seagal effort.  The gang war plotline is cliched, but there are enough solid moments to keep you watching.  Things improve once Rhames gets out of jail and starts turning the heat up on Seagal.  (It should also be noted that although Rhames plays a character who’s been in prison and is named “Iceman”, this doesn’t seem to be an Undisputed sequel as far as I could tell.)


Sure, the film is overlong and a bit over-plotted, but Foster’s plotline helps to make it memorable.  His road to redemption is reminiscent of the original Django with Franco Nero as they both must overcome having their hands crippled by the bad guys.  Nero never had Danny Trejo in his corner though.  Trejo’s character just so happens to be a “Mexican witch doctor” who intentionally lets poisonous scorpions sting Foster’s hands to help them heal quicker.  I have no idea if this has any basis in medical fact, but it certainly makes for a cool scene.


Foster is a talent to watch too.  Even though his character can’t use his hands for much of the movie, he still does a great job kicking ass without them.  He's a solid actor as well and reminded me a bit of Scott Adkins in some of his scenes.


Seagal is marginally more invested here than usual.  The scene where he lovingly talks about his gun collection is nice.  The way he goes on about them is enough to make you think they aren’t props, but actual pieces from his collection.  While he spends most of the movie sitting behind a desk, he does get up to kick a little ass in the final reel.  It’s here where he dons the scarf and sunglasses look we now associate with the modern era of Seagal films.  (He’d later adopt similar looks in Sniper:  Special Ops and Code of Honor.)  If only he got out from behind the desk sooner, this might’ve been a *** deal.
Posted by Mitch at 11:37 AM