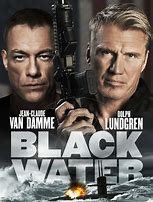 Jean-Claude Van Damme wakes up in a submarine being used as an off-shore black site for CIA detainees.  He has no memory how he got there, but luckily Dolph Lundgren is in the cell next to him to jog his memory.  Turns out he’s a former agent who lost a valuable thumb drive.  Crooked agents board the sub looking to silence Van Damme permanently.  JCVD naturally gets the upper hand and sets out to escape.


Those hoping for a legitimate Van Damme-Lundgren team-up will be sorely disappointed.  Even though their faces are side by side on the DVD, Dolph’s interactions with Van Damme are precious and few.  Dolph’s appearances are frustratingly fleeting, and his bemused, aloof, and entertaining performance gives us glimpses of what could’ve been.  Van Damme gives a solid performance all things considered; it’s just that it pales in comparison next to his recent work in the Kickboxer remake (and its sequel).  Video Vacuum favorite Patrick Kilpatrick (who was also in Van Damme’s Death Warrant) also turns up as the CIA agent, but like Lundgren, he’s sorely underutilized.


Black Water gets off to a promising start.  The idea of a sub being used as a government black site is certainly intriguing enough.  Too bad the plot is belabored, the pacing is sluggish, and the running time is needlessly inflated.


The claustrophobic sub setting doesn’t help matters either.  Much of the suspense relies on having the machine gun-toting villains miss Van Damme from nearly point-blank range, which takes some of the fun out of it.  The scenes that take place outside of the sub work much better.  (I liked it when Van Damme lands on a car and shoots a guy in the head.)  I just wish Van Damme had been given more of an opportunity to use some of his Kung Fu skills rather than leaning so heavily on the close-quarters shootouts.  Whenever Van Damme is stuck aboard the sub, Black Water sinks.