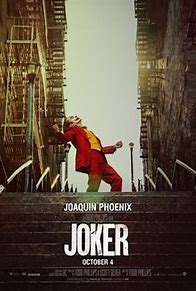 Joker is neither the incel recruitment video Twitter would have you believe nor is it the Scorsese-pastiche-as-comic-book-movie it was sold as.  It merely exists as a Thespianpalooza for Joaquin Phoenix.  If you ever wanted to see Phoenix get nuts (as Bruce Wayne ‘89 would say), this movie has you covered.  He laughs maniacally, contorts wildly, and dances like a blind white man on Soul Train.  He’s on screen nearly every minute of the movie and when he is, you can’t take your eyes off him.  It’s truly a fearless performance.  Not many people would lose fifty pounds, smash their head in, and cry till snot oozed out their nostrils, so we have to give the guy credit.


Joker famously doesn’t have a backstory in the comics, and the one presented here is vastly different from the ’89 film.  The thing is, it’s all origin story.  It’s less a superhero movie and more of a gritty character drama indie dressed up as a superhero movie.  This is an interesting idea, but it works much better as a character piece than a spandex opera.


It was talked-up as a homage to Taxi Driver and King of Comedy, but there’s as much Death Wish and Network in the movie’s DNA as the Scorsese pictures.  There’s a feeling of frustration about society letting “the little guy” down that both those films share.  When the Joker kills three people, he becomes a headline-grabbing sensation.  When he appears on TV, he inspires others to draw on his anger and frustration.


What’s interesting is that it’s not all a blame game.  The film never shies away from Joker’s mental illness as a contributing factor to his decline.  It could’ve copped out and just foisted the cause of Joker’s spree to being an Angry White Man, but there’s much more to it than just that.  There’s also a class struggle aspect that weaves in and out of the narrative.  Yes, Gotham City is a scary place to live for someone like Arthur.  Someone like billionaire Thomas Wayne on the other hand, has a very different experience living in Gotham, and the have-nots are growing restless about the economic inequality tearing the city apart.


Some may feel kind of cheated that there isn’t enough superhero-y stuff in the movie.  As I stated, it’s all origin and no real story.  In fact, he isn’t called even Joker until the last fifteen minutes or so.  The story, such as it is, has Arthur Fleck, an aspiring comedian hampered by mental handicaps trying to eke out a living in Gotham City.  In between sessions at a cut-rate shrink, he dotes on his loving mother (Frances Conroy) and cares for her, never missing their favorite program The Murray Franklin Show.  When he loses his job and medicine (due to government cutbacks) he aims his frustrations at Wayne.


I will back off here because it’s these scenes that are the most interesting.  Not because of how they connect back to a certain Caped Crusader, but how they inform Arthur’s journey.  Without giving anything away, I’ll just leave you with the questions the movie poses, which are:  Are we the sum total of the lies we’ve been told all our lives?  Or are we a product of the new truth we’ve found for ourselves?  Adding Arthur’s deteriorating mental state into the mix only makes what comes after a tragedy, and not a call to arms.


Arthur’s journey is involving, with a few twists and turns along the way just to keep you guessing.  Phoenix’s fiery performance also helps propel the film, giving Arthur glints of hope and humanity, while not entirely painting him as the victim.  It’s his destination that is sort of the problem.  That’s mostly because it can kind of only end one way.  As inevitable as that may have been, I still think there was room to have stuck the landing in a more precise way.  As it is, it’s fine, but the fact remains he was more interesting when he was Arthur than as Joker.  It also doesn’t help that the film suffers from Return of the King-itis as it contains not one, but three endings.  Any one of them by themselves would’ve worked as a coda.  (Okay, maybe just two of them.)  Having all three just kind of betrays the ending that came before, especially considering each mini-ending is worse than the one that immediately preceded it.


So, overall, I liked it.  As a vehicle for Phoenix, it will be around for a long time.  It will be dissected and discussed as a gonzo Method actor’s wet dream.  As a Batman movie (even though Batman doesn’t appear, it’s very much a part of his world), I don’t think it would even crack my Top 5, but I’m glad I saw.


It’s definitely not worth anyone dying over.
Posted by Mitch at 5:11 AM