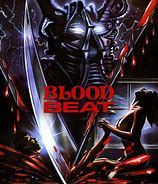 Ted (James Fitzsimmons) brings his girlfriend Sarah (Claudia Peyton) home for Christmas to meet his family.  Soon after, his mother (Helen Benton) is having odd psychic premonitions and painting ominous pictures.  One night, Sarah finds an old sword and before long, a glowing samurai ghost is knocking people off left and right.

I’m always on the lookout for a Christmas themed horror movie, but something tells me I won’t be re-watching Bloodbeat come December.  Imagine if Bill Rebane remade The House Where Evil Dwells and that might give you an idea of what we’re dealing with.  There’s an occasional odd scene that’s good for a laugh, like when Benton has a psychic argument with her daughter.  (“Don’t you dare come into my mind!”)  My favorite scene though was when Peyton was making love and orgasmed every time the samurai killed someone.


Speaking of the samurai, he is one of those heavy breather types who sound like Darth Vader.  His glowing sword sort of looks like a poor man’s version of a lightsaber too.  Heck, even the ending plays like a Jedi power battle with lots of people throwing their hands in the air and acting like they’re concentrating REALLY HARD to defeat the demented samurai ghost.


The low budget and hokey low-tech effects are one thing, but the amateurish acting pretty much sinks it.  The negative vision photography also gets annoying, especially when it’s used in such a random fashion.  Still, this is the only movie I can think of in which a can of Tab attacks someone.  So, I guess that’s fairly original.


The most amusing aspect of Bloodbeat has nothing to do with the movie itself, but more with how the film is set up on Amazon Prime.  Sometimes, I have to turn the sound down when I watch a movie, especially when everyone in my household has gone to bed.  Prime’s closed-captioning for Bloodbeat is priceless.  The audio cues are funnier than anything in the flick itself.  A few of the samurai attacks are accompanied by a weird sound and the subtitle, “mystical boinging” appears at the bottom of the screen.  If that technical term isn’t good for a laugh, I don’t know what is. 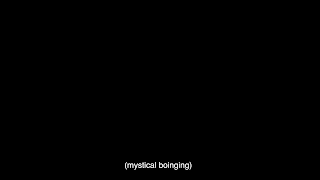