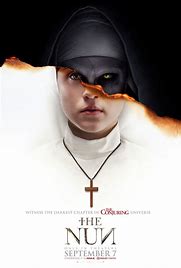 So, I had no desire of seeing The Nun as part of The 31 Movies of Horror-Ween.  Even the horror sequel completist in me was happy enough to include two Conjuring sequels in this month’s movie watching list and move on.  My intention was to watch Amityville:  The Evil Escapes and Amityville 1992:  It’s About Time and make them part of The 31 Movies of Horror-Ween festivities.  I hadn’t seen either movie and since they were set to play at my local theater as part of Bloody Disgusting’s “Retro Nightmares” series, I thought that would be a perfect way to experience them for the first time.


Apparently, I was the only one. 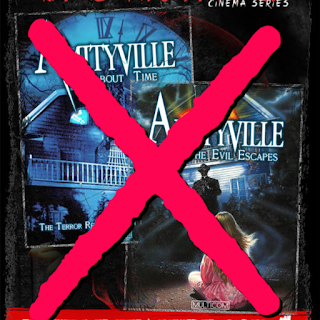 Due to lack of interest, the showings were pulled from the theater the day of the screening with no fanfare on the company’s website.  So, stuck at the movies with a Regal gift card burning a hole in my wallet, I decided to see The Nun instead.

Now before I get to my review, I just want to point out that I attended the Retro Nightmares screening of The House on Sorority Row the week before, but I never got around to reviewing it.  I reviewed the film more than a decade ago on my old site and I was less than kind to it.  Most of my complaints revolved around it being “too dark”.  Well, that review was of a VHS copy viewed on a small TV.  This time, seeing it on the big screen, I was able to appreciate it a lot more.  I still don’t think it quite works, but in a sea of ‘80s interchangeable slashers, it’s just weird enough to keep its own identity.


Also, the print was a lot lighter, so I could actually tell what the hell was going on most of the time.  I did like that they did very little to remaster the film.  it’s chockful of grain and looks probably just as it did when it was first released in ’83.  So, now instead of giving it a * ½ rating, I’d say it’s closer to a ** ½ flick.


The fact that The House on Sorority Row went over so well with the crowd made me hopeful for the Amityville screening.  Unfortunately, that never happened.  The management did assure me that the third and final Retro Nightmares screening of Sweet Sixteen and The Convent is still a go, so I hope to catch those next week.


Okay, so onto The Nun.  The Vatican sends a miracle hunter/priest (Demian Bichir) to Romania to investigate the suicide of a nun.  He brings along a young nun in training (Taissa Farmiga, sister of Vera, who also appears briefly in the Conjuring-heavy wraparound segments) because of her knack for having holy visions.  After arriving at the church, they soon run afoul of evil spirits, creepy graveyards, and of course the killer ghost nun (Bonnie Aarons) herself.


The Nun is overstuffed with too much backstory (like Bichir’s past as an exorcist) and too many visions and nightmare sequences that heavily pad the running time, which can only mean one thing:  It’s just like all the other movies in the Conjuniverse.  This is one of those cases where the filmmakers made a spin-off to something without realizing that they pretty much told you everything you already needed to know about the character in the last one.  Because of that, there’s really nowhere for the flick to go, and it quickly becomes a rapid succession of jump scare after jump scare.


Also, how many scenes of people slowly creeping up on a nun in the shadows can one movie take?  Six?  Maybe seven?  Let’s say eight.  Well, this one probably has double that.


There are a couple laughable moments here which keeps it from being a total letdown.  I especially dug the scene where Bichir is mysteriously buried alive in a graveyard and he takes it all in stride.  You know, it's just like another day at the office for him.


Bichir and Farmiga are both quite good, despite the hokey surroundings.  They help to anchor the movie and keep it from devolving into an overlong gothic music video.  Director Corin Hardy does show a nice eye for setting up atmosphere and the production design is excellent, but there’s barely enough quality moments here to fill a short film, let alone a full-fledged spin-off.
Posted by Mitch at 12:24 PM

Email ThisBlogThis!Share to TwitterShare to FacebookShare to Pinterest
Labels: the 31 days of horror-ween