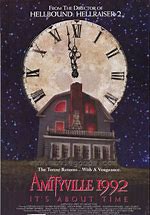 The Amityville sequels tend to blur together after about Part 3, so it’s always helpful when the subtitle reminds you which one it is.  In Amityville 1992’s case, it’s about time.  Or rather, a clock.


This was the sixth one in the series.  Like Part 4 it’s about a piece of furniture from the old Amityville Horror house bringing the evil upon another family.  It’s a little bit better than that entry, thanks mostly to some offbeat special effects and a smidge of T & A, but it’s no less uneven.


Stephen Macht comes home after a business trip and gives his girlfriend (Shawn Weatherly) a clock.  It doesn’t take long before his son (Damon Martin) is having weird visions.  While out jogging, a neighborhood dog bites Macht on the leg.  The bite gets infected, and he slowly transforms into a psycho.  His usually demure daughter (Megan Ward) also undergoes a transformation into a deadly sexed-up femme fatale.  Weatherly eventually learns the clock came from the Amityville house and sets out to stop her family from trying to kill one another.


Amityville 1992 isn’t exactly great, but there are some definite highpoints.  We get a Final Destination-y death involving a diaper truck and the scene where Ward seduces her boyfriend into stepping into a puddle of slime has a distinct Elm Street vibe.  My favorite bit though was when Ward gets it on with her reflection in a mirror.


It’s About Time is a little more fun than your average Amityville sequel, thanks to the playful tone and director Tony (Hellbound:  Hellraiser 2) Randel’s staging of a handful of amusing set pieces.  It’s a shame the lackluster finale goes on too long and suffers from some pure stupidity.  (The scene where the clock turns the family old and young is just plain dumb.)  Also, the accompaniment of a ticking clock during the scenes of weird goings-on get repetitive quickly.


It’s always nice to see the underappreciated Stephen Macht in a leading role, but unfortunately, he spends most of his screen time in bed nursing a leg wound.  It’s up to Weatherly to do most of the heavy lifting and she is well-equipped to do so (and I’m not just saying that because of her hot sex scene).  Ward does a fine job selling her transformation from goodie two-shoes to vamping vixen too.  It was also fun seeing Dick Miller pop up in a bit role.

Are you craving more reviews of horror sequels?  Well, you can read all about them in my latest book, The Bloody Book of Horror, which is currently on sale at Amazon.  Get your copy  HERE
Posted by Mitch at 6:58 AM

Email ThisBlogThis!Share to TwitterShare to FacebookShare to Pinterest
Labels: the 31 days of horror-ween